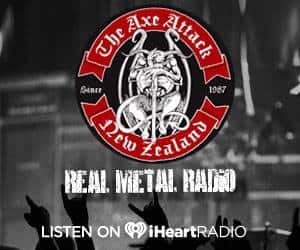 Back in early February, a Bring Back The Axe Attack Facebook page appeared from out of nowhere indicating something wasn’t right with New Zealand’s longest running metal radio show broadcasting on The Rock FM.

It’s one of the things that has built him a supportive following over the years. It’s also the fact that he genuinely cares about metal music in this country and why he’s dedicated himself to running The Axe Attack since 1987!

The media excuse that failed

stuff.co.nz reported that The Axe Attack was off the air for ‘technical reasons’ according to MediaWorks, who owns The Rock FM.

Didn’t take a genius to work out that media spin wasn’t going to fly with Axe Attack supporters given that other radio shows by The Rock FM were still on air.

To show my support and help the online campaign that was developing, I made the following video explaining why New Zealand needed The Axe Attack. It was shared on Bring Back The Axe Attack:

Other videos soon followed from Alien Weaponry, a Northland band who’s members’ average age is 13, and Dr. Dave Snell sharing what The Axe Attack meant to them.

An online petition was launched and The Rock FM Facebook page received lots of feedback from disgruntled listeners.

Eventually on 2 April, The Axe Attack made an announcement.

The Axe Attack is very pleased to announce it has a new platform for broadcasting and will be back up and running again from next Thursday April 9.

The new era of the Axe Attack will see it available for streaming 24/7 giving us all the freedom to tune in and enjoy the show anytime, anywhere.

The show will be available on-line and can also be accessed easily and conveniently through a phone app, tablet and desktop.

I am truly excited about the future of the Axe Attack and being able to deliver an exciting mix of some of the most influential and powerful music the planet has ever produced proudly side by side with our own kickass homegrown artists.

I do appreciate the fact that you have all been more than patient with this and I’m truly happy to say we are almost ready to broadcast.

I will have a full announcement with all the relevant details and connection/tune-in instructions next Thursday morning.

Thank you all again, for your incredible support.

Even though the idea is far from new, Internet radio usually has a niche audience, simply because in the past it’s been more complicated and costly to access than traditional radio.

However, in the last few years music streaming services like Spotify and Pandora have gone mainstream and mobile data has got cheaper making it more affordable to stream on the go.

Would access to the new platform be easy and simple?

The move to iHeartRadio

On 9 April, The Axe Attack made another announcement.

The Axe Attack finds a new home on iHeartRadio NZ

The Axe Attack is back and ready to rock with its own iHeartRadio NZ radio station! NZME is thrilled metal DJ and high profile musician, Paul ‘The Axeman’ Martin, is joining the internet radio revolution on iHeartRadio NZ. The show will continue to feature the best in heavy metal music from New Zealand and around the globe.

Carolyn Luey, Head of iHeartRadio NZ says, “When the news broke the legendary Axe Attack show had no home, passionate heavy metal fans from all around the country were up in arms. With 28 years’ experience on the airwaves and a loyal fan base the decision to include The Axe Attack on iHeartRadio NZ was a no-brainer.”

The Axe Attack show provides a home for all metal lovers, hard rock enthusiasts and every true blooded kiwi aficionado.

“I am extremely excited to be teaming up with iHeartRadio NZ to take The Axe Attack to the next phase. This is a fantastic opportunity that will see the show evolve to become bigger and better in every way,” says The Attack Host, Paul Martin.

“iHeartRadio have established themselves as a passionate and proactive company who strive to cater for the listener and to give them the best listening experience with music they want. They also recognise and value our beloved metal genre meaning The Axe Attack will only go from strength to strength. This is a massive and very positive step for our very own Kiwi hard rock/metal artists and the genre in general.”

With a long and respected history interviewing the hottest stars in hard rock and discovering up and coming talent, The Axe Attack should be locked and loaded on every device you own!

The Axe Attack is absolutely free and can be found at http://www.iheart.com/live/the-axe-attack-6848/ My concern around easy and simple access was answered. The Axe Attack would leverage the iHeartRadio platform who have been innovating Internet radio since 2008.

I must confess, before I knew much about iHeartRadio, I tried the mobile app and thought it was just a way for The Radio Network to peddle Newstalk ZB onto my smartphone so I got rid of it.

Now, I have The Axe Attack and Deeper with Sixx Sense set as favourites.

So what’s the lesson in all of this?

The metal community is loyal, more so than any other music community. Spotify published insights showing metal has the world’s loyalist fans. The Rock FM and MediaWorks misjudged that completely.

A commercial organisation’s priority, like MediaWorks, is profit. If they’re not seeing a satisfactory return, changes will be made despite any public good, just look at Campbell Live.

However there is a bright side.

Commercial organisations rely on us, the listeners and viewers, to turn a profit. Media organisations, especially, are struggling because of the disruption caused by the Internet.

We are actually in the driving seat because we can decide where to place our attention and money. On demand streaming services were created because we wanted entertainment on our terms, not someone else’s.

The same applies to all organisations. If we’re not getting value, we can simply go elsewhere or switch off completely, it’s really that simple.